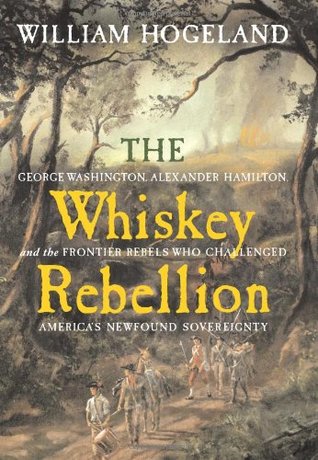 William Hogeland’s The Whiskey Rebellion was published in 2006, well before the Bourbon Boom, and well before Lin Manuel Miranda had children rapping about Alexander Hamilton as a hero. Brilliant though Hamilton was, he was tone deaf and out of touch with the people. He was also conniving, manipulative and unscrupulous in the pursuit of what he believed to be loftier objectives.

History tends to move swiftly from the American Revolution to the War of 1812, glossing over what nearly was our first civil war. As the infant country struggled with its first steps on its own two feet, faced with persistent threats from Native Americans, Spanish and British occupants, it nearly tore itself apart.

In the Bourbon world, 1792 is known as the year Kentucky became the 15th state to join the Union. It was also the year the Mingo Creek Association was formed in western Pennsylvania, violently rejecting Treasury Secretary Hamilton’s new tax on distilled spirits, and igniting a national crisis. At that point, the Forks of the Ohio River (Pittsburgh) had been the center of America’s distilling. In an effort to stymie the resistance, Hamilton began steering the army’s purchases of whiskey toward Kentucky in 1794, significantly altering the future of our native spirit.

An angry movement took hold at the Forks, eerily reminiscent of the Revolution that was just fought against Great Britain. Liberty poles were erected, new flags were hoisted, and local enemies were tarred and feathered. The violence wasn’t only aimed at governmental tax collectors. Even innocent distillers who merely cooperated with the government by registering their stills saw their properties burned to the ground. Violators of the resistance had their sentences commuted only after being forced to pledge loyalty and drink whiskey with the insurgents.

What began as a mob morphed into an organized resistance marching itself towards treason and outright secession. Men such as James McFarlane, a Revolutionary war here who fought for the nation’s independence alongside George Washington, now led a militia against the President. At a standoff facing the tax collector John Neville’s home, McFarlane was shot and killed under a white flag of truce, escalating a violent standoff and inflaming passions further.

Often overlooked is the fact that the whiskey tax wasn’t actually the main motivation for the rebellion. Less than 1/3 of the 7,000 people actually owned stills. The tax was only the initial catalyst for a growing populist movement. The fight was, at its core, over a redistribution of wealth. The Forks threatened to burn “Sodom” (Pittsburgh) to the ground, driving the corrupt governmental oppressors back east where they belonged, and returning prosperity and land to the people who deserved it.

Fascinating are the moments where the moderates among the rebels attempted to walk the group back toward reconciliation, only to be thrust forward by a growing and passionate movement.  Attorney Hugh Brackenridge, a central figure in the story, continually attempted to work both sides of the conflict in an effort to resolve it. He softened the actions of the mob, steering them away from further violence when possible, all while feigning support for the rebels. He was nearly hanged for treason before Hamilton exercised rare coolness in judgment in uncovering Brackenridge’s true role.

In 1794, when the citizens of the Forks finally voted unanimously to lay down the insurrection and submit to the Union, Washington and his army were already headed determinedly west. Due to an ill-timed emergency, Hamilton, the inflammatory secretary of the treasury responsible for sparking the entire conflict, was able to convince Washington to allow him to ride alongside the President as an interim Secretary of War.

Washington’s soldiers were at best disinterested and predominately miserable. Marching all day and sleeping in cornfields at night, those who didn’t desert were cold, tired and hungry. Washington strained to maintain discipline, but the patchwork army’s eagerness for a clash with the traitors only grew. Unbeknownst to these soldiers, the people of the Forks were already prepared to submit. Ironically, the paradigm had shifted from an angry Western mob challenging the civilized government to the governmental mob violently heading toward its citizens.

Hogeland refers to one curious passage in which Washington “remained fixed on the idea that protest and outright rebellion were twin expressions of self-created democratic societies, which must be eradicated.” Outright rebellion certainly has no place, but protest itself has been one of the most sacred and protected rights of our citizens for over two centuries. It’s an odd word choice from either the President or the author.

As they neared the Forks, Washington received sufficient intelligence to believe the conflict would reach a peaceful resolution. He foolishly turned around, taking his commanding presence and steady judgment back toward Philadelphia. With Hamilton now in command of a bloodthirsty and restless army, the citizens of the Forks were hastily and recklessly arrested and terrorized in what was later referred to as “The Dreadful Night.”

Hamilton’s sweeping arrests, tortures, and ruthless interrogation methods served the ends of revenge and oppression rather than unification and resolution. He railroaded innocent people, blackmailed witnesses and short-circuited justice in an effort to make examples of a few high-level culprits. I don’t recall seeing this scene in the Broadway play.

Ultimately, only 20 men were brought to Philadelphia for trial, just 2 were convicted and both pardoned by Washington. The conflict officially ended without a major battle and without executions. The whiskey tax was no longer challenged by the people of the Forks- It was now sneakily avoided.

Hamilton coined the phrase ‘The Whiskey Rebellion’ and credited it with strengthening the government, western expansion and national finance.  Perhaps, but history also witnessed Thomas Jefferson repeal Hamilton’s whiskey tax as well as Hamilton’s primary targets as leaders of the rebellion all becoming prominent political figures in the coming years.

Every worthwhile history of Bourbon references the Whiskey Rebellion, but Hogeland’s book gives the reader a far greater understanding of its significance. It may have lost some prominence over time since a major battle was avoided, but it was a key defining moment in our nation’s history and another example of whiskey’s critical role in its development.