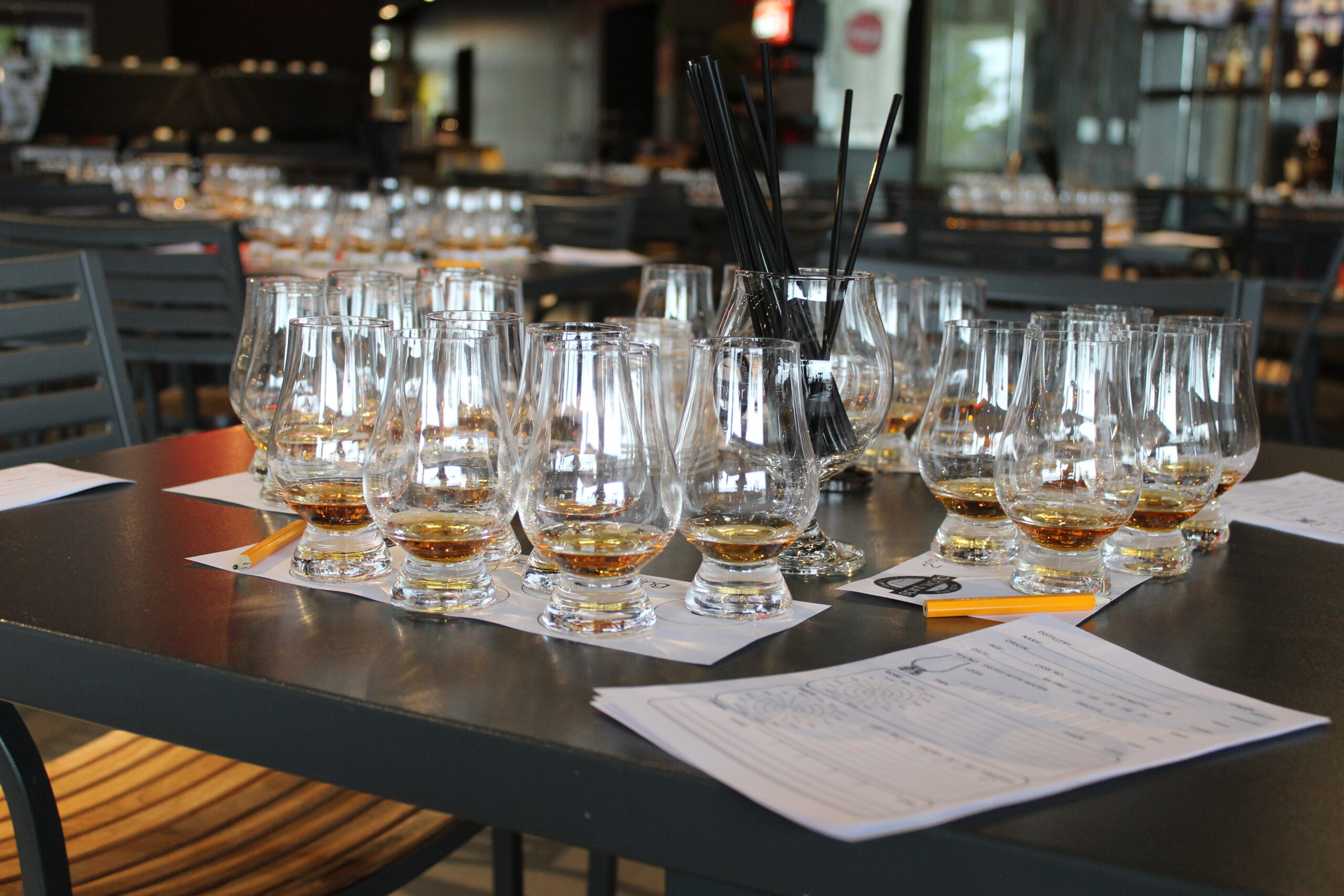 Last year, we gathered 22 whiskey fans in the tasting room at Omaha’s Spirit World for the Ultimate Blind Rye Tasting and learned that a sub-$30 shelf rye can hold its own against a seldom-seen $100 bottle. For that tasting, we strategically grouped those ryes into specific pairings for purposes of direct comparisons.

This year, Andy and I presented Laurie and Alzuri with a new idea: We wanted to taste 6 well-known Bourbons (2 each from 3 different price points) in a completely random order. The mix would contain a couple of Bourbons you could buy on the shelf every day, a couple which are difficult to find, and at least one highly-regarded limited release. We also kept the proofs in a narrow range between 90 and 95. Blind tasting removes important psychological influences, including brand name and bottle design, forcing you to evaluate solely by what really matters- the whiskey in the glass.

With a true passion for Omaha’s growing whiskey community, Laurie is constantly working to foster an environment for gathering and sharing our love for Bourbon. No event is approved until two questions can be answered in the affirmative: (1) “Are we providing enough value to our guests?” and (2) “Will they be excited to come to the next one?” Luckily for us, this event filled up quickly and we had over 40 tasters participating. Andy and I decided rather than just host, it would be fun for us to participate in the blind tasting along with our guests. Though we selected the bourbons for the event, Alzuri did not reveal to us the order in which he poured them.

Along with the Bourbons, randomly ordered and poured in advance, we provided our guests with a tasting flavor wheel for reference, blank tasting note sheets and pencils. We also provided distilled water droppers, glasses of water to sip, and coffee beans to cleanse the nasal passages.  These are the essentials if you’d like to host a tasting of your own.

As the group gathered at their tables, and the discussion began, we learned we had a balanced mix of men and women, some younger and some older, some experienced and some relatively new to bourbon. We mentioned that we wanted to maintain a discussion throughout the evening and share our tasting notes with each other. Given the unique opportunity to gather important data from a roomful of people, I also gave each person a simple sheet and asked them to rank the 6 bourbons in their order of favorite to least. Lastly, we instructed them to not finish their glasses until the end of the night. We wanted them to go back and compare the bourbons to each other once they’d had a chance to try them all. We also suggested they add a drop or two of distilled water to each whiskey after trying it neat, noting how the whiskey changed from it.

Before getting into the Bourbons and the data collected, there are some critical takeaways from the tasting itself worth mentioning:

Following a random drawing for the order, tasting notes gathered from different guests are below.

First out of the gates was Blanton’s Single Barrel. We loved the idea of including two whiskeys with the identical mash bill (recipe) in the same tasting. Blanton’s and Elmer T. Lee are both non-age-stated Bourbons distilled from Buffalo Trace’s #2 recipe (around 15% rye). Blanton’s, however, is aged in Warehouse H, the only metal-clad warehouse at Buffalo Trace. Albert Blanton felt the wide temperature swings in this warehouse forced the whiskey in and out of the barrel faster, resulting in a quicker aging process. Blanton’s is also bottled at a slightly higher proof than Elmer T. Lee.

Tasters picked up on the rye spice, along with oak, vanilla and cherry flavors. One person commented that adding a little water really pulled out more of the cherry and some clove.

Until last year, the Elijah Craig Small Batch was a 12-year old Heaven Hill bourbon containing 13% rye. The mash bill remains the same, but is now non-age-stated and thought to be a mix of 8 and 12-year old barrels.

Several people noted the delicate, floral, aromatic nose of this whiskey. On the palate, the rye spice was detected, along with some citrus, dill and vegetal flavors. By comparison, this was felt by some to have a bigger mouthfeel than the Blanton’s.

What originally began as an experiment by Jefferson’s Trey Zoeller was so popular that it became a regular release. The whiskey spends several months on a boat at sea, rocking inside the barrel as it traveled from port to port. The constant agitation caused by the ocean waves, the wide temperature swings, and the barometric pressure changes were all thought to age the whiskey faster. Add the element of the salty ocean air and you have all the makings of a unique whiskey experience. It’s a wonderful story that means absolutely nothing to a person tasting it blind.

My only taste of Jefferson’s Ocean was years before from Voyage 2, and I distinctly remember tasting the briny, salty ocean in it. Funnily enough, not a single person in the group detected anything resembling saltwater in this whiskey, including myself. Maybe it was the bottle that conjured up those tastes in my mind?

A little floral on the nose led into what some described as a thin mouthfeel. The finish was alternatively described as having a “bad aftertaste,” “tastes like soap” and “gaggy.” Water improved the flavor a bit, according to a few folks. Walking the room, more than one person mentioned to me that tasting this bourbon actually made the one before it (Elijah Craig) taste much better.

Sharing the same mash bill as the first whiskey of the evening (Blanton’s), you would expect similar tasting notes. And you’d be wrong.

The nose was described as floral and sweet. The taste was described as noticeably warmer and richer than others. Flavors mentioned included burnt honey, nuts, caramel and spice. The longest finish up to that point according to one person, while another got a distinct cinnamon flavor at the end.

The most expensive and limited of all bourbons in the tasting, Michter’s 10 was the one we were most excited to see the results of. My own personal recollection of this bourbon was that it had a fantastic nose, but an average palate and a short, disappointing finish.

On the nose, initial comments mentioned a dry grain or grassy aroma along with some oak. At the exact time I asked the group if anyone smelled maple syrup, a couple of people had been discussing the same. I had already incorrectly guessed that the Elijah Craig was the Michter’s 10, but this easily would have been my second choice. Both had terrific noses on them.

On the palate, flavors discussed included green apple and even cognac. Taste was described by one guest as “nice and crisp,” while the finish was lamented as noticeably short by a couple others.

The rye spice was noted by a couple of guests, though I found it interesting that the higher rye content didn’t seem as prominent as it was earlier with the 13-15% rye Bourbons. There were also a few comments about the sweetness, which is very common for most Four Roses Bourbons. This was described in terms of caramel, butterscotch and even butter. The general consensus felt it was a nice Bourbon, but it didn’t seem appear to blow anyone away.

At the outset, I asked everyone to rank the Bourbons 1-6 for me. I was glad to see a number of sheets had been reordered more than once, which told me that they had gone back and adjusted their rankings after doing further comparisons.

To arrive at a composite score for each Bourbon, I totaled up its ranking from each entry sheet and divided by the number of people (a lower score is better). While not an exact science, it does accurately reflect the overall consensus opinions from the tasters. The results may surprise you.

Before we dig a little deeper into the data, a couple very important reminders:

That being said, the group results indicated a clear favorite and a least favorite Bourbon from the tasting.

Elmer T. Lee dominated with a composite score of 2.05, way ahead of the second place Bourbon. 31 of 43 people had it ranked as one of their favorite bourbons (designated by a #1 or #2 ranking), while only 4 ranked it as one of their least favorite (designated by a #5 or #6 ranking). How much does Elmer T. Lee retail for? $40. Yes, I realize that it’s allocated and not readily available everywhere all the time, but it does, in fact, make it to store shelves sometimes at its retail price.

Jefferson’s Ocean drowned in last place with a composite score of 4.47. While 6 people ranked it one of their favorite bourbons, 24 of them ranked it as one of their least favorite. Not a very impressive showing for a bottle costing over $80.

Beyond these two findings are a number of other fascinating insights gained from this.  For example, both the second place Elijah Craig Small Batch and the Four Roses Small Batch each had about 13 people ranking it as one of their favorites and the same amount ranking it as one of their least favorites. Looking closer, the Elijah Craig had 9 #1 rankings while the Four Roses had none. Given that the Elijah Craig can be found basically anywhere for $25-30, over 1/5 the people rated this their very favorite Bourbon of the evening. Keep that in mind the next time you’re having a party.

Given the runaway victory by Elmer T. Lee, one has to wonder what happened to its half-brother, the Blanton’s? Blanton’s is the one given its own special warehouse with magical aging properties. Blanton’s is the one with the higher proof. Blanton’s is the one with the fancy horses on the bottle and a higher retail price point. It is also allocated and getting harder and harder to find. Yet in a blind setting, just 9 people ranked it as one of their favorites, while 13 ranked it as one of their least favorites. Looking even deeper, there were only a couple of times when Blanton’s and Elmer T. Lee were even close to each other in an individual person’s rankings. This tells us something fascinating: Though Elmer T. Lee and Blanton’s literally began from the same exact whiskey, people experienced enough variation between the two Bourbons to regard them as completely different. If you learn nothing else from this tasting, remember that a mash bill is only the beginning. Warehouse conditions and barrel selection have a massive impact on a whiskey’s character.

Lastly, notice how our limited release, put-your-name-on-a-waiting-list, bribe-the-store-manager-to-get-a-bottle Michter’s 10 Bourbon fared. 3rd place would be respectable if it were not sandwiched closely between two Bourbons that each cost less than1/3 of its retail price. In fact, while 13 people ranked the Michter’s 10 as one of their favorite Bourbons of the tasting, the same number of people also ranked Elijah Craig and Four Roses the same. Most importantly, however, is the somewhat shocking result that nearly half the 43 people in the tasting rated the Michter’s 10 as one of their least favorite Bourbons of the evening! NEARLY HALF!

Our results aren’t going to guarantee your experience with these whiskeys any more than an Oscar nomination will guarantee your experience with a particular film. Hopefully, they will better illuminate for you the often-forgotten concepts that pricing and scarcity do not always correlate to a whiskey’s quality or properties. I will grant you that as pieces of art, some bottles will generate more excitement when viewed on your shelves, but when used for their intended purpose, the effects may be far different. This is why blind tasting is such a valuable exercise.