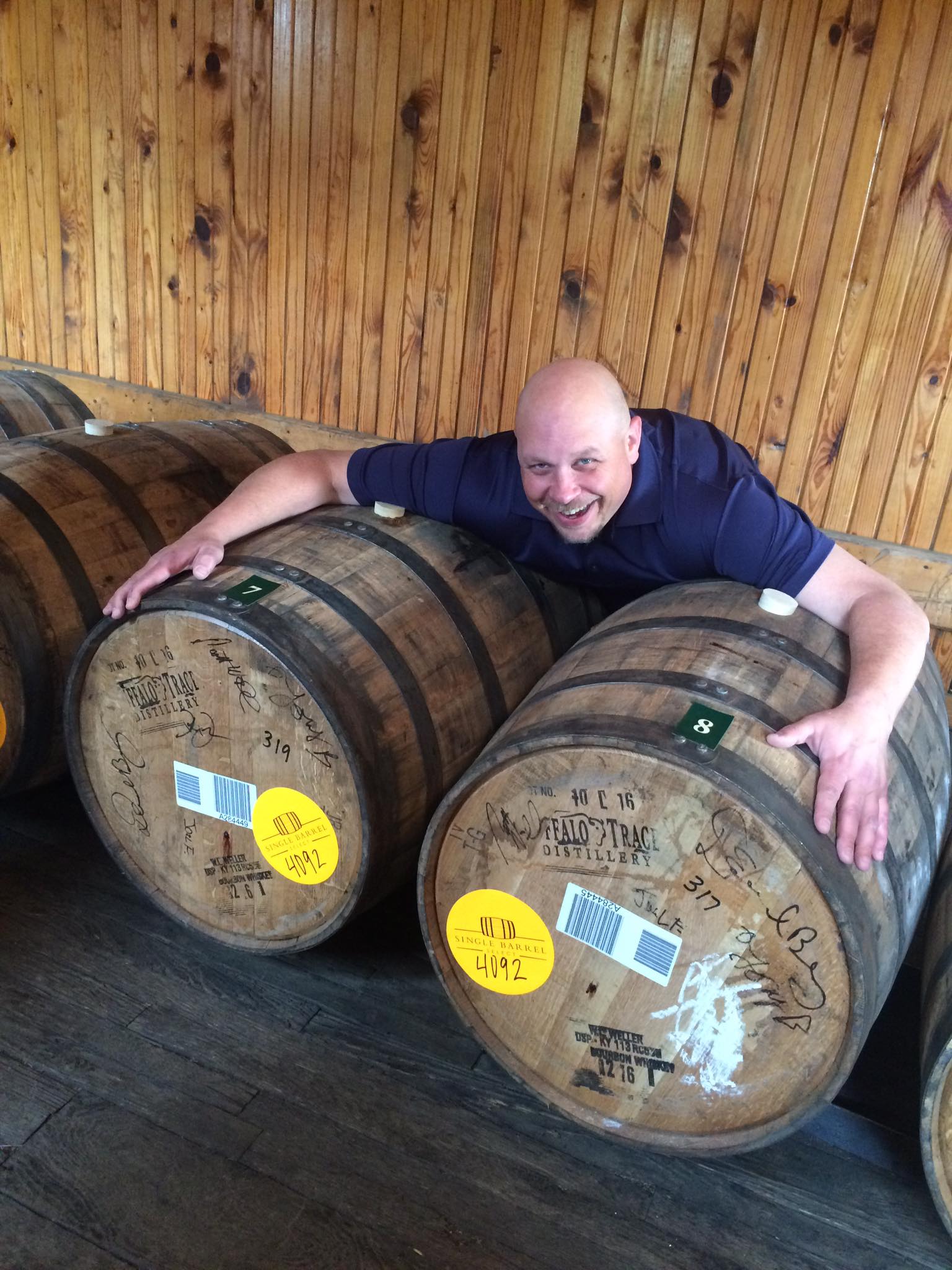 He’s been called “The Nicest Guy In Whiskey,” and my very first experience with Ed Bley, Spirits and Beer Manager for Kentucky’s Cork ‘N Bottle (CNB), certainly supports that title. Last year, Ed reached out to send a few samples of CNB’s barrel picks for me to try. Not only did I receive several large sample bottles, but he also tossed in a full bottle of his latest Four Roses pick!

I’ve been noticing common threads among successful individuals in whiskey, and it largely involves a focus on the customer experience. Like Distillery 291’s Michael Myers, Ed was once an award-winning chef. Like Base Camp’s Ryan Geller, Ed was formally educated in the hospitality business. “It was a good base and got me into recognizing flavors,” he says. Who else would equate the nose on a glass of Bourbon with the arrangement on a dinner plate?

Just a few years ago, while working for a neurosurgeon in Cincinatti, Ed’s friend poured him a glass of Pappy Van Winkle 15-Year and he was hooked. “Whenever I get into something, I geek out and learn as much as I can about it,” he said. He then spent time tasting and trading as much Bourbon as he could, ultimately assisting Kyle Dynes manage the huge Whiskey Barrel Society picking group. Fate took a fortuitous turn when Kyle arranged a private barrel collaboration with the owner of CNB and Ed came along. In the middle of the tasting, Ed noticed some confused customers over in the Bourbon section and went over to help them out. Obviously impressed, CNB’s owner told Ed, “You need to work here!” And that’s where the resurrection of Cork ‘N Bottle began.

Back in the 1960’s, Gordon Hue had built a Bourbon empire at CNB before it was even popular. After his passing, the next generation struggled to maintain the store’s once-dominant position, and the company was sold. “I can’t even begin to describe how bad it was when I came,” Ed explains, “The customers had left, the store was dead, there was no product, and beer sales were non-existent.” Working with the current owner, Ed rebuilt the entire store in 2 years. “I focused on being fair and honest, changing all the negative perceptions about our store,” he explains.

Fast forward to now, where 240 people recently filled CNB’s 10,000 square foot store when the latest CNB picks were released. “We sold 3 ½ barrels out in an hour,” Ed states, somewhat in disbelief. The private barrel program he’s developed for CNB is nothing short of amazing, particularly for a store its size. They do around 40 private picks each year, and are currently Wild Turkey’s Number 1 private barrel customer in the country. Ed loves treasure-hunting and in Kentucky, there is no better hunt than in a rickhouse. This is one of the reasons Ed loves visiting Wild Turkey, which doesn’t limit the number of barrels you can taste from. When you taste up to 15 different barrels, it gets difficult to remember which ones you were interested in, so Ed began the practice of placing coins on the barrels to mark them. One time, he accidentally left his change, and a group passing through the rickhouse asked Eddie Russell about all the coins left on the barrels. Eddie told the group, “Oh, some guy from Northern Kentucky was in here and he marks the barrels he likes.” Immediately, one of the group members excitedly asked, “Ed Bley?” and he bought three of those barrels on the spot! Perhaps the main reason Ed’s picks are so well-respected dates back to an early piece of advice Kyle Dynes gave him on one of their first barrel tastings together: “Never doubt your palate. Doubt everybody else’s.”

Ed’s natural ability to forge relationships is another key component and “the part that so many people miss about our industry,” he explains. “It’s not even about the Bourbon, I’m getting to know the people.” And now, “If have a question, it’s only a question of which distiller I ask. I love that I can message any of them and have an answer in a heartbeat,” he says. “I know these guys. They know my family.”

This extends to customers as well. “I know everyone who comes into my store. People aren’t just here to buy a bottle, they come to hang out and socialize. That’s what’s set us apart and really blown the store up,” he says. “We go out of our way to make people feel special,” he explains. Every CNB staff member contributes to creating an experience for their customers, including buying pizza for those camping out for a new release, and letting everyone taste a private pick before they buy it. Another famous Ed Bley creation is his “Hide and Seek” game, where rare bottles are posted on Facebook, and then hidden throughout the store for customers to find.

But this is Bourbon, and no limited release can ever satisfy all of the demand. “We’re fair to a fault on what we do with our bottles,” he explains. The CNB Facebook page (a must-follow, by the way) provides plenty of notice before sought-after bottles will be available. For the Buffalo Trace Antique Collection and Pappy Van Winkle bottles, Ed holds bi-monthly, year-round raffles that are videoed and posted on Facebook to prove they are done fairly. And yet, he still expects to receive close to 1,500 private messages whenever information on a new release is posted. “It’s hard because I want everybody to be happy, I want to be able to hook everybody up,” he says, “I appreciate that they’re that concerned about getting a bottle that they’re going out of their way to message me.” As long as he’s not hunting, fishing or spending time with his family at the time, he’ll try and respond to every one of them.

While most people think Louisville or Lexington is the place to go for Bourbon, Northern Kentucky actually gets more Bourbon traffic than anywhere else. Crescent Springs, where CNB is located, is uniquely positioned right near both Indiana and Ohio. With Indiana allocations being light and Ohio a state-run liquor system, Crescent Springs is constantly flooded with people crossing the border in search of bottles. Add to that mix those Louisville and Lexington residents heading North, feeling they have a better shot finding something special outside their own areas.

Obviously Ed knows that a number of his customers are flipping these bottles for a quick profit. That doesn’t bother him at all. “I think most distillers would agree (even though they’d never say it publicly) that 98% of the Bourbon boom is because of the Secondary Market. No doubt about it,” he explains, “Whiskey wasn’t popular until people found out they could make money on it.” And he doesn’t think the popularity of Bourbon is going anywhere for a long time.

Cork ‘N Bottle has literally become a tourist destination for people across the country and this is exactly what Ed wanted to create. “Before I ever worked at a liquor store, I shopped at them,” he explains. “I’ve been on the other side of the counter and I’m going to go out of my way to make sure people have an amazing time, because it all comes back,” he says. If you’re planning a trip to Kentucky, you need to stop in Crescent Springs and meet Ed Bley, “the Nicest Guy in Whiskey.”